THE following article is the product of a research and study conducted under the Philippine Press Institute – Philippine-Extractive Industry Transparency Initiative (PPI-Ph-EITI) Media Fellowship on Digging Stories that Matter.]

THE continuing saga of oil and gas industry in the country – the unending clamor of the public that the government must do something on the deregulation of oil prices, the unending bickering of political leaders about federalism and the right of every regions on the benefits of natural resources especially oil and gas, and the scandals in the government in the use of Malampaya fund – all of these boil down to one, the inequality in the distribution of services in the communities that must be sustained by the taxes collected from the extraction of the country’s natural wealth underneath.

While upland communities and those in mining regions are clamoring for equal distribution of royalties and other benefits from mining, still there are communities that must also benefit from the multi-billion dollar Malampaya Gas-to-Power Project but seems to be being left behind and was taken for granted, as the folks claimed.

The discovery of an alternative and indigenous source of energy was a milestone event for the Philippines, a country that has historically relied on imported fuel for the bulk of its domestic and industrial power requirements.

With so much dependence on imported oil fuels, the government and the private sector are in search of other sources for the country’s supply. Explorations in the Philippines began in early 70’s. But with the failure of Shell explorations to find oil reserves in the Visayan Seas and Palawan in the late 70’s and 80’s, and spending over US$ 90-million, the Shell Exploration and its partner Pecten Philippines were dissolved in 1983.

But all of these did not cause Shell to give up. In 1990, Shell returned to Palawan and focused on the Camago find. This would pay off with the discovery of gas –trillions of cubic feet of it— in nearby Malampaya.

The Malampaya Deep Water Gas-to-Power project is one of the largest and most significant industrial endeavors in Philippine history. A joint undertaking of the Philippine national government and the private sector, the project is spearheaded by the Philippine Department of Energy (DOE) developed and operated by Shell Philippines Exploration B.V. (SPEX) on behalf of joint venture partners Chevron Malampaya LLC and the PNOC Exploration Corporation.

The Malampaya Deepwater Gas-to-Power project is the first undertaking of its kind in the Philippines employing state-of-the-art deepwater technology to draw natural gas from deep beneath Philippine waters. The indigenous gas fuels three natural gas-fired power stations with a total generating capacity of 2,700 megawatts to provide 30% of Luzon’s power generation requirements.

Since October 2001, the Philippines has been importing less fuel for power generation, providing the country foreign-exchange savings and energy security from this clean fuel.

Natural gas has the least CO2 among fossil fuels and is more efficient than other sources of power like coal and crude oil.

The operation of Malampaya in the power stations’ full capacity of 2,700 megawatts is displacing an estimate of some 1.35 million kilograms of CO2 per hour–a cleaner and more sustainable process, as compared to energy generation using coal or fuel oil.

With this huge amount of taxes being collected by the government, that may include the millions of pesos subject of the Malampaya fund scam that hounds government officials from one administration to the other, the question now is, how do the government distributes the taxes or how it translates the collected taxes into services to benefit the Filipinos.

Putting Isla Verde in the picture

From the production platform in northwest Palawan, the extracted gas had to cross over 500 kilometers of seabed through a pipeline that passes through Verde Island Passage all the way up to Batangas where the Onshore gas Plant would further process and finally convert it to energy as fuel to three power plants in Batangas City supplying around 70% energy requirements of the Luzon grid.

Verde Island Passage is a strait that separates the islands of Luzon and Mindoro, connecting the South China Sea with the Tayabas Bay and the Sibuyan Sea beyond. It is one of the busiest sea lanes in the Philippines because it is the main shipping route between the Port of Manila and the Visayas and Mindanao in the south. Also, many ferries navigate the waters, connecting the surrounding provinces of Batangas, Marinduque, Occidental Mindoro, Oriental Mindoro and Romblon.

At the center of the passage is Isla Verde (or Verde Island), that lies between the mainland Luzon and Mindoro Island and can be reached by an average of one-hour boat ride from the Port of Batangas. Divided into six barangays, the island is within the civil administration of the city government of Batangas.

Famous destination within the island include Mahabang Buhangin, a kilometer-long stretch of white sand beach, Sitio Cueva, where a cave leads to the other side of the island. Verde Island is also known for its dive sites and hospitable residents. The residents’ main source of living are fishing and mat weaving. 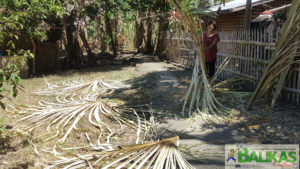 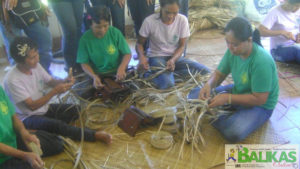 Former Pilipinas Shell Foundation, Inc. (PSFI) executive director Ding Roco recalls that “While we were required to conduct only three public hearings, we conducted about 35, with every municipality from the platform to Batangas.. we talked to everyone along the 500-kilometre pipeline.”

Customarily, in every industry, the communities that must benefit first are the host communities. Part of the taxes being paid to the government by the industry locators are allocated to the basic services of the host communities, from the province, the city, and down to barangay level.

All communities (considered as host barangays) in Palawan, Oriental Mindoro and Batangas City are benefiting from social services, except for six (6) barangays in Isla Verde. The irony is that while the natural gas that is fuelling the country’s biggest natgas-fired power plants in Batangas City has to pass through Verde Island Passage from Palawan down to its onshore gas plant in Tabangao, Batangas City, these six (6) barangays of Isla Verde –Liponpon, San Agapito, San Agustin Kanluran, San Agustin Silangan, San Andres and San Antonio—were left behind and were not included to the long list of host barangays. The result of which, these barangays were not receiving the same amount of benefits that most of the host barangays are receiving from the government.

As mentioned, without passing through the Verde Island Passage, the Malampaya gas to power project will be incomplete and will not be able to pay billions of pesos to the government in the form of taxes. It cannot fuel the 1,200MW Sta. Rita Power Plant, the 500MW San Lorenzo Power Plant and the 1,00MW Kepco Ilijan Power Plant. However, the six (6) barangays of Isla Verde remain unelectrified. The communities are relying on small generator sets that run from 6:00 o’clock until 9:00 o’clock in the evening only with fees relatively higher compared to the rates being collected by Meralco and other power distributors in the mainland Luzon.

“But we believe that Isla Verde is entitled to more than these. Our fishermen are complaining that the presence of the pipeline caused the depletion of their catch. If only our barangays will be included in the host barangays of Malampaya, we believe that more services will be afforded to us and we can consider that this project is really beneficial to the communities,” the former official claimed.

With the billions of taxes collected by the government, and millions of which are subject of the fund scam of corrupt officials, still there are communities that are left behind instead of benefitting sustainable development that the Malampaya gas to power project has promised  to bring in a couple of decades back in history.|

By JOHN MAICO M. HERNANDEZ IN an island where the unearthed capture of the world’s richest marine biodiversity is home, DOST Batangas has proven itself faithful to the mandate of bringing Science and Technology (S&T) closer to the people. In an attempt to standardize process and improve quality, consistency, and shelf life, Verde Island’s Pakaskas […]