Paul Varilla scored 17 points and four other teammates joined him in double-digits in an 80-75 decision for home team Athletics over Valenzuela. 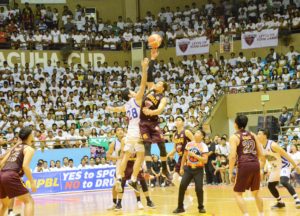 The home team played well with a 30-8 start and in all, made good on 11 triples and converted 47 percent of their field goals. Still, they needed to sustain the play to frustrate the Classic who were only down by six with 33 seconds to go.

Batangas would not let them inch closer, though, as a pair of splits from the stripe by Varilla concluded the fight.

Jeff Javillonar dropped a deep three in the remaining seconds, but it proved to be meaningless as it was the Athletics who were celebrating a 1-0 lead in the best-of-three semis series.

This, after they conquered Bataan in the quarterfinals. Now, the top-seed in the tournament is a pristine 3-0 in the first-ever playoffs of the maiden MPBL.

For Valenzuela, Adrian Celada topped the scoring with 23 points.

In the other pairing, seventh-seed Paranaque made an impressive show by routing third-seed Muntinlupa, 84-59. The Cagers were in the game for only the first three minutes, up 4-0, before Paranaque made a 27-4 run that catapulted the Patriots way ahead, 27-8.

Paranaque was coming off an upset of second-seed Bulacan in the quarterfinals and is now one win away from an improbable Finals appearance.

Muntinlupa and Valenzuela will try to trounce each other as they both try to recover in Game 2 on Saturday at the Muntinlupa Sports Complex.|#BALIKAS_News

THE employees of SM City Batangas, SM City Lipa and SM Center Lemery made some 150 children from SOS Children’s Village, Buklod Unlad ng Batangas Inc. and DSWD Lemery happy this holiday season as they were treated to a day of fun-filled Christmas experience through the SM ChriSMiles project. The kids enjoyed a simple Christmas […]

THROUGH SM’s Operation Tulong Express, employees of SM Malls in Batangas recently distributed 500 Kalinga packs from SM Foundation to communities affected by super typhoon Rolly in Batangas. They were able to reach out to families badly hit by the typhoon from Barangays Pallocan west, Libjo and San Isidro in Batangas City, Barangay Bugtong na […]

By JOENALD MEDINA RAYOS THE great Batangueño journalist-public servant, BAYANI G. MALALUAN, writes 30, November 9, at the age of 87 in Batangas City. “Kuya Ani” or “Ka Ani” to persons close to him, the great man has been a journalist throughout his life as he wrote for several newspapers before and after Martial Law […]